You are here: Home / Beauty / A True Picture of Cosmetic Surgery Trends Around the World

Beauty has always been an abstract concept and thus each person has a different notion about it. But as a community, our fixation on certain ‘ideal beauty standards’ has led us to believe that the rest of us are somehow less than or not at all beautiful.

Eventually, we end up feeling imperfect and want to make certain changes in our features so as to portray ourselves as somehow being perfect, well at least physically.

Ultimately, we realize that the only way to achieve perfection in terms of outer appearance is – plastic surgery or cosmetic surgery. An ever-increasing amount of our population is going to extreme ends to restore their youthfulness or alter the shape of their face or other body parts.

A report by Medzino highlights the popularity of different cosmetic surgery methods around the globe. 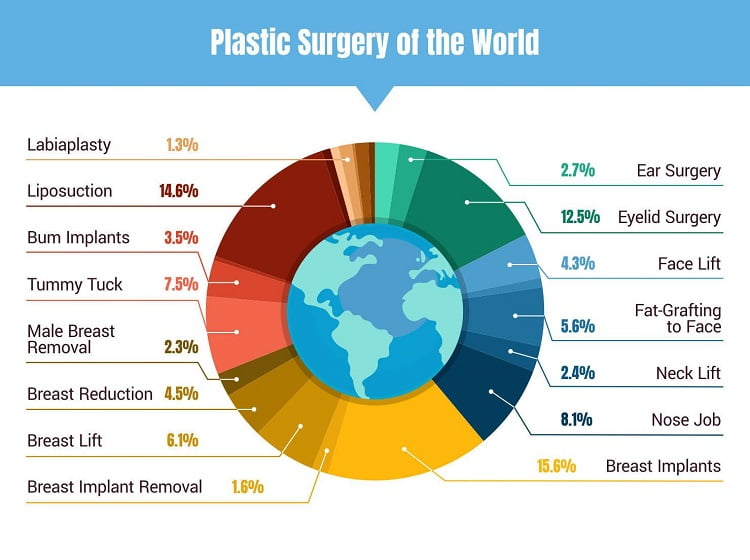 The first observation we made from the above illustration is that breast augmentation is the trendiest cosmetic surgery. This is also visible from the facts that clearly state that 15.5% of every cosmetic surgery performed in the world is breast implants. After breast augmentation comes liposuction – the second most well-known restorative cosmetic surgery which includes the removal of fatty tissues from unwanted areas. Labiaplasty is the least famous plastic surgery in the world, with only 1.3% of the overall populace deciding on this. Second to the last comes breast implant removal, which is an indicator of the fact that maybe 1.6% of the world started feeling they’ve gone excessively far in their quest for flawlessness.

But the objective of providing these facts and figures is not to lose the string and overlook the entire ideas behind the campaign. A few brilliant minds at Medzino created an interactive world map with the help of Tableau. This map allows the reader to interact with the map by choosing a particular nation – after which the map shows the prevalence of each and every cosmetic surgery procedure offered in that locale. Similarly, when you select a particular procedure from the list, it’s popularity over the globe is represented through the intensity of shading.

Even though the discoveries of this report are expansive and overwhelming – some intriguing results can be drawn from it. For example – India is the leader in hair transplantation and penis enlargement surgeries. Apart from that, the outcomes are fairly evenly spread across the globe – with North and South America, Russia, and China being the leaders across most of the cosmetic procedures.

Another aspect of the study was comparing men and women with respect to the amount of time and energy spent on their own appearances. The results were indicative of a modern and progressive world, where appearance is equally regarded as important by both the sexes. 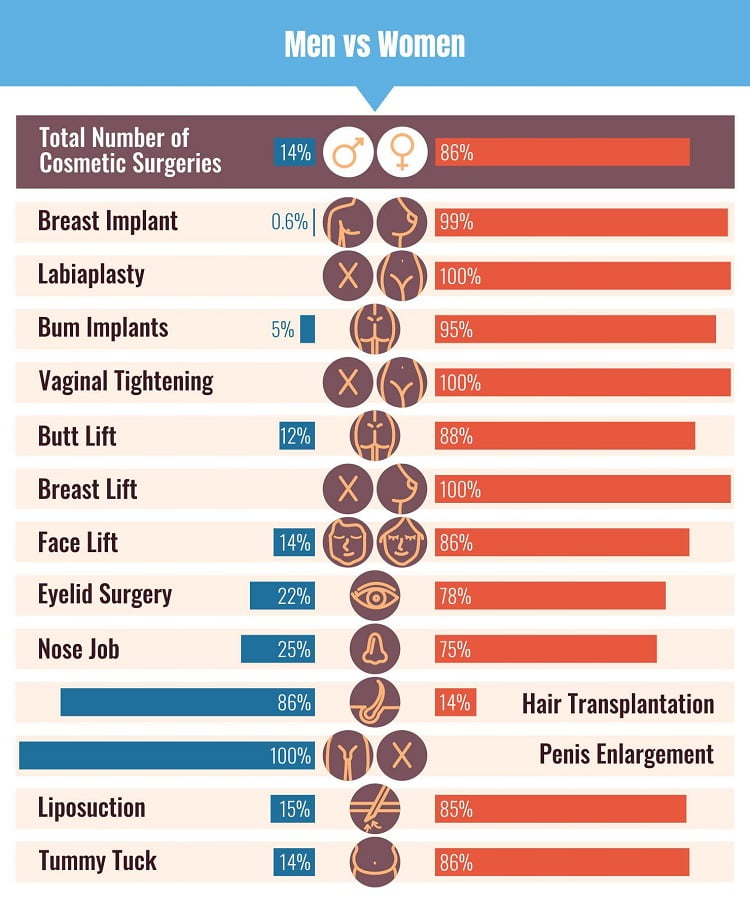 As we can see, both men and women are willing to go to extreme lengths to keep their looks and enhance them. But ladies are still far ahead of men in the number of surgeries they undergo. A big reason behind this is that most of the surgical procedures have been custom fitted to ladies and those that are accessible for men, are mostly not for ladies.

Interestingly, of the cosmetic procedures offered that do not comply with sexual orientation like liposuction and belly tucks – men are exceeding the ladies here with a whopping 85% and 86% respectively.

There are different corrective cosmetic surgeries available that can address issues experienced by people concerning their private parts. Sexual cosmetic surgeries are proven to enhance confidence and self-esteem amongst those who are affected. This area of the report shows the notoriety of such medicines over the globe for the two people.

A pattern that can be easily deduced from the above chart is that the number of ladies undertaking various surgeries related to their sexual inner parts has gone up from 2013 to 2017. Contrastingly, men going for penis enlargement have reduced consistently from 10,000 in 2013 to a meagre 2000 in 2016.

For more insights from the report, visit here.