Exotic chia seeds that come to us from Central and South America are increasingly popular in our market as well. In the current trend of organic, raw and healthy natural food, this plant has its rightful place. Chia seeds are rich in useful nutrients, they are an excellent source of minerals and other nutrients, and they have a beneficial effect on the body. The increasingly popular organic seeds and other plant-based foods that are now sought after as regular menu items have been used since ancient times, including chia seeds. Their name in the ancient language of the Mayan people means strength, and their healing power and nutrition should certainly not be doubted.

Chia is an annual plant, Salvia hispanica, whose natural habitats are Mexico and Guatemala, and can also be found in Peru, Bolivia and Paraguay. It blooms with enchantingly beautiful white and purple flowers, in dense hanging clusters. The plant’s flowers develop into medicinal chia seeds, which can range in color from black to white. The ancient peoples of the central parts of America, the Aztecs and the Maya, knew about the beneficial properties of chia seeds. The Aztec peoples cultivated chiu as one of the main food crops, in the era before European man set foot on their soil. The seeds of the plant were used both as food and as a ritual element in ceremonies. 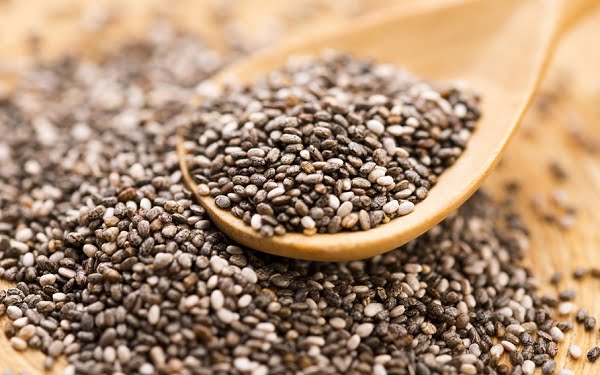 Today, chia seeds are something new, and we could say a rediscovery, in the field of healthy eating and modern trends in nutrition. They are another modern superfood, popular worldwide for their nutritional value and ease of use. Chia seeds have gradually gained popularity over the last two and a half decades, and rightfully so.

What do chia seeds contain and why are they healthy?

Chia seeds that we can find on the market are grown on ecologically certified lands, and producers must meet European standards of organic cultivation. In crops that do not use pesticides, artificial fertilizers and genetically modified organisms. The seeds are rich in nutrients and useful substances and have an extremely positive effect when used in food. They are rich in healthy fatty acids, hydrate the body, help in regeneration and restore energy. In addition, they are very filling foods that stimulate digestion and better absorption of nutrients from other foods.

Antioxidants – They are rich in antioxidants, which has a significant effect on improving general health. Antioxidants are important for the body’s fight against harmful free radicals and for eliminating toxins. The immune system therefore becomes stronger, and the body is less susceptible to disease.

Fibers – They contain a significant proportion of fiber, which is necessary for good digestion and metabolism of food. Precisely because of the fibers, they are also good for nutrition during reduction diets, because they have a favorable effect on the metabolism, and at the same time provide a longer feeling of satiety.

Manganese, phosphorus and copper – Chia seeds contain a lot of useful minerals, the most important of which is manganese. Manganese plays a vital role in the growth and development of muscles and bones. Phosphorus from chia seeds helps tissue regeneration and maintenance, while copper is a necessary element for healthy and proper heart function. Copper is also a mineral that is most often lacking in our diet, and chia seeds are an excellent source of this mineral.

Potassium and calcium – They are also rich in no less important potassium, and two tablespoons of chia seeds contain twice as much potassium as in one banana, which has long been known to be an excellent source of potassium. There is also a lot of calcium in chia seeds, which is vital for bones, and also of great importance for the brain and nervous system.

Iron – Among the minerals in chia seeds, iron stands out, which it contains in a significant proportion. As we know, iron is an integral part of hemoglobin in red blood cells, and hemoglobin is necessary for the transport of oxygen throughout the body.

Fatty acids – Chia seeds are rich in useful omega 3 fatty acids, which make up a third of their composition. In this sense, they are the best source of healthy and useful fats, which are important for metabolic processes and general health. They are rich in proteins, which is why they are recommended in the diet of athletes, for recovery and muscle regeneration.

Vitamins – The only thing that chia seeds lack are vitamins. In addition to the abundance of minerals, they do not contain a significant proportion of vitamins, which some other foods have. They contain a small proportion of vitamins A, B, E and D, all of which are important for good vision, healthy hair, nails and skin, teeth, muscles and nerve tissues.

They do not contain a significant proportion of sugar, oxides or gluten and therefore represent an ideal food for different groups of people. They are excellent as an addition to meals and suitable for sensitive people, people suffering from diabetes, stomach problems and heart problems.

The use of chia seeds in the diet

Chia seeds have a neutral taste and do not affect other foods with which they are consumed. They are most often used as an addition to the meal, which enriches it with many nutritious and positive ingredients. It is usually added to salads, as an addition during the preparation of various pastries, cakes and bread, and can also be added to sour milk products. Ground chia seeds are added to yogurt or kefir and make them a more complete meal.

They are combined with nuts and cereals, and they go best with almonds, corn and millet. They can be used as an addition to muesli meals, along with various types of bran and flakes. They are also used in the preparation of cooked and meat dishes, they are added to soup, meatballs, and even in the mixture for frying, as a nutritious substitute for breadcrumbs. They increase the nutritional value of any dish to which they are added and enrich the food with dietary fiber, which enables easier digestion.

Chia seeds are easy to digest, they have a delicate taste, and they do not need to be ground in preparation so that their ingredients are used and they can be digested. Chia seeds should not be fried, because they will lose a significant portion of useful nutrients during heat treatment. They absorb water easily and before use it is enough to stay submerged for ten minutes. During this time, they swell and almost turn into mush, after which they can be consumed with a spoon and added to other dishes.

Mix all the ingredients so that the mass comes together nicely and put it in the fridge overnight. During this time, the seeds will swell and get a nice gelatinous structure, like a pudding. Leave to stand at room temperature for a while before serving. If desired, fresh fruit can be added during preparation.

Chia Quinoa Cookies – Chia seeds are often added to healthy snack and snack recipes, such as Crispy Quinoa Flake Cookies. For this healthy treat you will need:

Heat the oven to 180 degrees, and during that time mix the chia seeds and almond milk in a small bowl and let it swell. In a large bowl, mash the bananas, add the quinoa, almond butter, chia seeds and milk and mix to obtain a uniform mixture. At the end, gently mix in the pieces of chocolate and dates and add a little cinnamon. Shape the biscuits and bake on baking paper for about twenty minutes or until they are golden brown in color.