Amaranth, better known to some as stir or stir, is a plant that originates from South America and the Asian continent.

Although it has all the same properties as cereals, this plant is not included in their group, so it is often called a pseudo-cereal. With its over 60 species, it is one of the oldest plants in the world, and the most famous in our country is the red amaranth, recognizable by its characteristic red flower color.

Amaranth is a plant that reaches almost 2 m in height, its leaves are green and wide, and its flowers are golden or bright red. The grain of Štira resembles a grain of millet in its appearance. It is a plant that can withstand both high and low temperatures, but which does not need rich and fertile soil for its development. 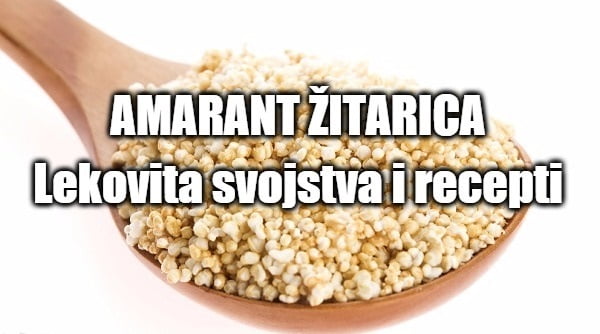 Our attention was drawn to the entire opus of nutrients contained in horseradish by scientists who, in their research of poor South American countries, noticed that, despite the great poverty and misery in which the people of those areas live, there are no malnourished people, precisely thanks to the fact that in their diet they use exactly this plant.

In human nutrition, amaranth can be used in the form of a young plant, leaves, grains, but also processed products such as flour, coarsely or finely ground. The plant itself is very fertile and produces more than 100,000 seeds. It is possible to meet Styr in the field, where it grows in abundance and resembles some kind of weed plant, or certainly in a cultivated form in plantations.

Amaranth grains have very high nutritional value. There are about 370 calories in 100 grams of grain.

They primarily contain abundance of proteinsthen a lot calcium and ironbut also other microelements such as magnesium, selenium, phosphorus, potassium, copper, zinc, sulfur.

As far as fat percentage is concerned, from 5-9% fat which contains, 77% make up unsaturated fatty acids, among which linoleic acid dominates. From the essential acids contains methionine, lysine and cysteine. Carbohydrates are found in the grain mainly in the form of starch.

From the vitamins are represented by vitamin A, then vitamins of the B group such as vitamin B1, B2, B3, as well as B6, but also vitamins E and K. What fibers concerns, this food is 3 times richer in fiber than wheat, and contains phytosterols which are extremely important for the regulation of cholesterol levels in human blood.

And what is certainly the most important thing to mention is the fact that it is Fr gluten-free foods.

Amaranth leaves also have a high nutritional value, considered to be significantly higher than spinach. It is rich in vitamins such as riboflavin and beta carotene, as well as numerous minerals. It can be added to salads, fresh, unprocessed, or prepared and cooked as a stew and side dish.

The importance of amaranth for human health

Due to its wealth of calcium and proteins, amaranth is a plant that is very gladly recommended for use by pregnant and lactating womenthen to childrenespecially in the period of intensive development, but also active athletes.

It is a source of protein and the amino acid lysine an ideal substitute for meat in human nutrition, so it is recommended how vegetarians as well as admirers of the vegan way of eating.

It is considered that this plant is extremely important for proper functioning of the brainie the entire nervous system, then for raising immunity, lowering blood cholesterol levelsbut also that there is anticancer effect due to the antioxidant effect of vitamin E.

The importance of Štir in cooking

Štir is used in cooking as an ingredient in bread, soup, cream soup, in salads, but also in sweets, puddings and cakes.

The grain can be used boiled or baked, when the famous amaranth popcorn is obtained, then it can be ground into flour, finely or coarsely ground, and as we have already mentioned, the leaves also have their multiple purposes.

Boiled amaranth as a side dish

If you want to prepare amaranth as a side dish, i.e. to cook it, you must know that 2-3 measures (cups) of water are added to one measure (for example, one cup of amaranth). When the water boils, add amaranth grains and spices to taste. All this is cooked on low heat for up to 30 minutes until the grains absorb the water. Then it stands for another 10-15 minutes and it is filtered. Among the spices that you can add are, in addition to salt and oil, pepper, garlic, oregano, parsley, etc.

For the famous amaranth popcorn you need:

The principle is still the same as for all popcorn, where corn kernels are poured into a pan, covered with oil, covered, baked at a high temperature, and then salted to taste.

For a delicious and above all healthy amaranth cream soup, you will need:

First, the amaranth grains are stewed on low heat according to the recipe mentioned above, and then they are ground in a mill or blender. Put the butter in the pan and when it heats up, fry the onion and carrot in it. Combine all that with the vegetable soup and cook on low heat for about 15 minutes and then puree. Add the cream to it and mix well to obtain a compact mass. Add salt and pepper to taste, then add chives either to the pot or to the plate, for better taste and decoration.

For a delicacy such as amaranth pudding, we need the following:

Pudding is prepared very simply. First, grains of stearic are added to the heated soy milk, and then it is cooked together for 15 minutes on low heat with constant stirring. Then the rest of the ingredients are added and everything is combined and cooked for another 10 minutes with, of course, continuous stirring. At the end, the resulting pudding is divided into bowls and decorated with chopped oranges and apricot jam.

And for the end…

Chocolate crunch made of pine nuts

In addition to pudding, it is possible to get crunch chocolate from amaranth. Simply pop it out and mix with melted dark chocolate and pour into silicone molds.