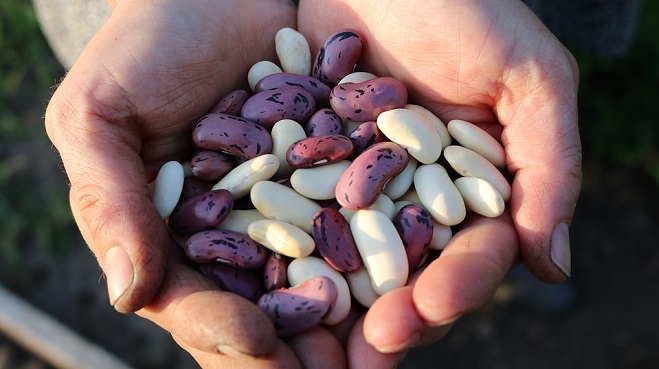 Broadly speaking, beans belong to the legume family (Fabaceae/Leguminosae). This family consists of as many as 730 genera and almost 20,000 plant species. We call them, by their common, popular name, legumes, because they produce edible or inedible pods containing smaller or larger grains. With some of them, the fruits hidden in the pods are useful for us, while with some we use only the pods with unripe grains.

Among these plants there are very important foodstuffs for human consumption, which also have their economic importance: peas, soybeans, lentils, green beans, broad beans, chickpeas, peanuts, carob and beans. Some serve only for decoration: mimosa, acacia, albicia, etc.

The fruit of this family of plants can be a multi-seeded or one-seeded pod, which can open, i.e. it bursts when it ripens, so that it then sheds its seeds. The seed itself has a hard cotyledon, under whose coat there are highly nutritious substances in the germ and cotyledons.

In the legume family, a special place is occupied by the genus Phaseoulus (bean), which has about 70 plant species. All these species are native to Mesoamerica. At least four species were domesticated and cultivated in pre-Columbian times for their fruits. The most prominent species among them is the bean or Phaseoulus vulgaris, which is now cultivated worldwide in tropical, subtropical and temperate climates.

The common bean was first mentioned on the European continent in the 16th century, and it arrived in the Balkan region from Italy in the 17th century.

The beanstalk can grow in height, like a creeper, and it can also go in width like a bushy plant. Today it is found on all continents, except Antarctica. Brazil, India and China are the biggest producers.

According to the height of the stem, beans can be divided into three basic types: low-growing, which reaches a height of over 130 cm, semi-squat, which ranges from 60 to 130 cm in height, and low-squat, which does not exceed 60 cm.

Many well-known cultivars belong to this species. There is an equally large number of bushy and creeping varieties. The color and shape of the pods and kernels varies widely.

Black turtle is a small, shiny, black bean. It is especially popular in Latin America and their cuisine.

Calypso beans are half black, half white, with one or two black spots on a white background. Until it is ripe, the pod can be picked and the green grains can be eaten, but when it is ripe, it is harvested and used as a dry grain.

Cranberry originates from Colombia and is known as cargamanto bean. Boriotti or Roman bean is one of the varieties of this bean that is grown in Italy and has a slightly thicker skin. It is used in Mediterranean cuisine.

Flageolet beans are most commonly eaten in France. The seeds are small, light green and kidney-shaped. The texture is firm but creamy if cooked fresh or semi-dry.

Kidney beans, also known as red beans, got their name because they resemble kidneys in shape and color. It is sometimes used in a dish called chilli con carne (chilli with meat) and is an integral part of cuisine in northern parts of India. It is also used in New Orleans and southern Louisiana, as well as in the Caribbean and Central America.

Pinto beans get their name from their colorful skin. It is the most widely used bean in the US and northwestern Mexico. It is usually eaten whole in soupy form or pureed. It is mostly put in burritos.

Navy beans are especially popular in Great Britain and the USA. Other types of white beans include canellini, a popular variety in central and southern Italy that is related to kidney beans.

Canellini is a variety popular, as mentioned, in central and southern Italy, but was first developed in Argentina. These beans are larger than navy beans, and are closer to kidney beans. It is used for minestrone soup.

Azuki beans (Vigna angularis) are cultivated in East Asia and in the Himalayas. It is very nutritious and the ripe seeds are mostly red in color. The name azuki comes from the Japanese language. Today, it is mostly grown in China, South Korea, Taiwan and Japan, but also in the USA, India, Congo, Angola and South America.

Beans have been used in Serbia since the 17th century. It is a food that is widely used in domestic cooking, primarily because of its nutrition and the presence of a large amount of protein. It is prepared in different ways, but mostly as soupy beans and prebranica beans.

It is believed that beans are grown on over 20,000 hectares, with yields of around 1.3 tons per hectare. Low-growing beans are mostly grown here, i.e. squatter

We usually divide it into late and early varieties, and the species differ in color and shape, so we have colorful, yellow and white varieties.

Tetovac and Gradistanac are the most famous old varieties of beans. They are short in stature, with kidney beans of white color. They are resistant to diseases and easy to grow. They have abundant yields.

Protein, vitamins and calories in beans

The primary nutritional values ​​of beans include an excellent source of dietary fiber and protein, but recent studies show and confirm additional benefits for human health. There is evidence that bean extract is effective in reducing body weight, improving blood glucose regularity and supposedly lowering the risk of cancer.

It is believed that 100 g of ordinary white beans contain approximately 20 or even more grams of protein. Vegans and vegetarians are happy to use it in their diet, because with its help they replace meat.

Percentage-wise, beans are rich in complex carbohydrates, which are 52%, fats, which are 2.1%, and numerous vitamins and minerals.

Minerals are present in sufficient quantity for the daily intake of a healthy person: phosphorus (35%), iron (22%), potassium (20%), magnesium (19%), manganese (38%), copper (43%). Molybdenum, which is concentrated in almost all tissues in the body and is necessary for our nerves, is present in beans in large quantities. Since our body does not contain it naturally in large quantities, the intake of molybdenum through beans is one of the biggest advantages of consuming this food.

Selenium is a very important nutrient found in beans. This mineral is very necessary for our body. It is a trace element and antioxidant that protects cells from oxidation and prevents premature aging of muscles, skin, and brain. It is very important for the proper functioning of the thyroid gland. Since our body does not produce it, we have to get it through food.

All types of beans, both pinto and kidney and red and regular white, are rich in nutrients, protein, fiber, folate, iron, potassium, magnesium, etc. In addition, they contain a very low percentage of fat, trans-fat, sodium and cholesterol. Because of their high concentration of health-promoting nutrients, eating more beans can improve overall health and reduce the risk of developing certain diseases, including heart disease, obesity and many types of cancer.

Nutrition experts recommend that adults consume 25 to 38 g of dietary fiber per day. The intake of dietary fiber contributes to the feeling of satiety and helps to maintain the proper functioning of the digestive system. Beans are a rich source of soluble and insoluble fiber. On average, beans provide 7 or more grams of total dietary fiber per half serving. Fiber consumption is also associated with a reduction in total cholesterol as well as bad cholesterol (LDL), as well as a reduction in the risk of developing coronary heart disease, metabolic syndrome, stroke, hypertension, diabetes, obesity and some gastrointestinal diseases.

Beans are full of folate

Beans are full of the B vitamin folate. Folic acid is essential for the production of red blood cells in the human body, as well as for the development of the embryonic nervous system during the early stages of pregnancy. Adequate intake of folic acid has been shown to reduce the risk of neural tube deformation in newborns. Some folate can be lost from beans during the soaking and cooking process or can be reduced when the vitamin interacts with other food ingredients. Quick-soaking beans (cooking briefly, then soaking for an hour) can result in folate loss compared to traditional long-soaking.

In general, to maximize the natural folate content of beans, some researchers suggest using a slow soaking method and a cooking method that prepares the beans in 150 minutes or less.

Elevated levels of triglycerides and cholesterol in the blood, especially LDL cholesterol, significantly contribute to the increased risk of heart disease. High plasma homocysteine ​​levels are associated with an increased risk of cardiovascular disease. Although some studies have shown that folates can reduce homocysteine ​​levels and therefore the risk of heart disease, the topic remains controversial and more research is needed.

A varied diet with saturated fat and sufficient fiber (especially soluble fiber) as well as B vitamins are recommended to reduce the risk factor for cardiovascular disease. Several studies have shown that regular consumption of beans can help reduce total and LDL cholesterol, as well as other risk factors for heart disease. One study showed that the risk of a non-fatal heart attack was 38% lower if a serving of cooked beans was consumed once a day. Other researchers reported significant reductions in blood cholesterol levels when canned beans were consumed daily.

Diabetes is becoming more prevalent worldwide as the global obesity epidemic continues. Eating a variety of legumes, including beans, can be beneficial not only in preventing diabetes, but also in managing blood sugar levels.

Beans are rich in complex carbohydrates that dissolve more slowly. As a result, consumption of beans has been shown to increase satiety and help regulate postprandial plasma glucose and insulin levels. Fiber in legumes was among the types of fiber associated with a reduced risk of metabolic syndrome, which includes glucose disturbances and an increased risk of diabetes.