Cabbage is a biennial plant that belongs to the cabbage family, although in appearance, apart from the leaves, it has no other common characteristics with this vegetable. The stem and fruit of this plant are located just above the surface of the earth, and are harvested when they reach the size of a tennis ball, i.e. around 10 cm, depending on the variety. Because of the apple-like appearance of the fruit, it is often called apple.

The word kohlrabi is of German origin and in translation means – kohl (cabbage) and rube (turnip). Thus, kohlrabi is a type of wild cabbage that originates from the Mediterranean and arrived in Europe in the 16th century, and today it is the most widespread, i.e. it is mostly grown in Germany and Italy.

There are several varieties of kohlrabi, and we usually divide them according to color, green and purple, but also according to the shape of the fruit, pear-shaped or round, apple-like. 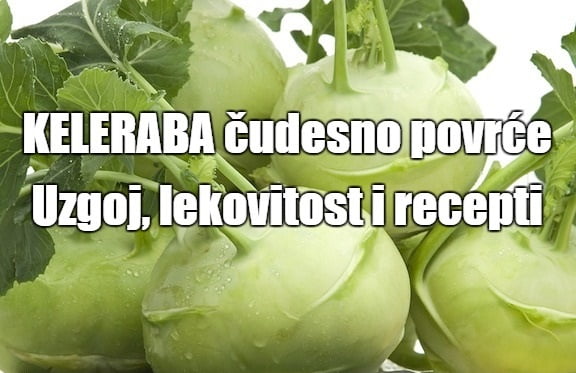 Kohlrabi seeds are similar to the seeds of other cabbages and, although they are mostly planted from seedlings, it is of course also possible to obtain kohlrabi by direct sowing. Due to its thick roots, it can be grown both outdoors and indoors (mainly in greenhouses and greenhouses). From sowing to the time kohlrabi is ready for picking, a time period of between 5 and 9 weeks usually elapses.

If kohlrabi is grown in the spring, it is best to grow it from seed, when it can be covered with some kind of agrotextile, which will greatly shorten the time needed for vegetation. If it is grown in autumn, it is usually planted from seedlings. Once ripe, it doesn’t stay edible for long, so if you want to always have it in your garden, you have to sow it every few weeks (about every 20 days).

Land when growing kohlrabi, it must not be fertilized too much, especially not with manure and ammonia, because in that case the stems, ie the fruit, will burst. Ph.D the land value that needs to be enabled for the best yield is between 6 and 7.

Land must also be owned enough moisture, of course not too much, but enough to avoid drought that would make the nutritious part of the plant inadequate, hard and bitter to eat. Therefore, the first abundant watering is usually done during sowing, and then it can be watered moderately every 7 days.

Optimal temperature it is for breeding between 7 ˚S and 20 ˚Sbut you have to take into account what season it is, as well as the differences between day and night temperatures.

It is important to note that kohlrabi can be planted as early and late planting and that it is best to do it from seedlings in open or closed beds when it has 4-5 leaves, which is about 5 weeks after sowing. However, even those grown directly from seed will give huge yields, even up to 15 tons for early and 30 tons for late varieties. It can be grown as a pre-crop, inter-crop or as a follow-up crop.

Time to harvest kohlrabi is when the thickened part of the stem reaches the size of a tennis ball, i.e. the size of about 5-8 cm (according to some growers and more, although they generally agree that the time of harvest depends, i.e. varies from variety to variety). The plant is cut by hand, under the stem (fruit), so the root is cut, and later the leaf is removed. It is eaten while it is young, when the fruit is tasty, soft and juicy, fresh in salads, juices, boiled, stewed or baked.

As we have already mentioned, the thickened stem, i.e. the fruit, of kohlrabi is used in the diet, usually cooked, as a stew and/or as an addition to various dishes, and less often in a fresh state (which is the best option, because this way all its nutrients are taken in unchanged ). However, outside the refrigerator and freezer, this plant does not survive, because its taste changes and the fruit becomes hard and unusable for eating.

The stem, i.e. the apple-like fruit of the kohlrabi, has a very high nutritional value and contains about 10%-12% dry matter, 6-7% carbohydrates and plenty of vitamin C, calcium and iron. Fats and proteins, as well as folic and pantothenic acid, thiamin and niacin, are found in traces, and magnesium, phosphorus, manganese and copper are also present as minerals. There are less than 30 kcal in 100 grams of kohlrabi.

The leaves, whether dark green or purple in color, are also used in food. The leaves are particularly rich in beta carotene, the provitamin of vitamin A and phosphorus.

Kohlrabi is first of all a plant that, due to its extremely high nutritional values ​​and the abundance of vitamin C it possesses, strengthens the immune system.

Its beneficial and positive effect on the cardiovascular system, as well as on reduction total quantity bad, LDL cholesterol.

Due to the abundance of plant fibers and low calories, this plant gives a long feeling of satiety, so it is ideal to be included in the menus of people who tend to reducing your body weight.

It adversely affects the digestive system digestive system (as a help with constipation and therefore in the fight against colon tumors), but also on bone and urinary system where it prevents the appearance of sand or stones in the urinary tract and/or helps to remove them.

It is also good for dental health, against viral and fungal infections, against edema as well as for strengthening of connective tissue.

It is best to eat kohlrabi fresh, because its heat treatment loses vitamins and minerals, especially vitamin C. When fresh, it can be added to various salads, especially salads and dishes with fish, cheese and meat. If it is cooked, it should be done for about 30 minutes, and if it is cut, it should be cooked for only 10 minutes. You can stew it, fry it or bake it in the oven, cover it with vinegar, yogurt or any other delicious toppings.

Here are some recipes for preparing delicious and very healthy dishes with kohlrabi.

For this healthy, tasty, refreshing and nutritious salad you need:

The salad is prepared very simply. First, grate your purple kohlrabi in a large bowl, and then add grated black and white radish to it. Season it all with a little salt and olive oil to taste, and add, depending on what one likes, apple cider vinegar or squeeze one lemon or one orange into the salad instead. Finally, add some sour cream and you have your perfectly healthy and delicious salad with kohlrabi.

To prepare the dish called Stuffed kohlrabi, you need:

To prepare this dish, you first need to peel your kohlrabi and then boil it in salted water. When the kohlrabi has cooled, carefully hollow it out and remove the mass from the center. Save the pulp you obtained by hollowing out for the filling.

In a small bowl, boil a cup of rice in two to three cups of water, enough to make it swell, and fry the onion and minced meat in a pan. Then combine the rice and the hollowed-out part of the kohlrabi with the onion and meat and fry for another minute. Season to taste with salt, olive oil, pepper and other spices.

Arrange the cooked kohlrabi that you previously hollowed out in a fireproof bowl, fill with the resulting mixture, cover with sour cream and bake in the oven until they are dark golden in color.