Cauliflower is a biennial herbaceous plant from the cabbage family. However, due to its specific taste, as well as its outstanding nutritional value, cauliflower is considered to be better for nutrition than other cabbages.

The conditions required for the quality cultivation of cauliflower are similar to the conditions necessary for the development of other plants from this family. 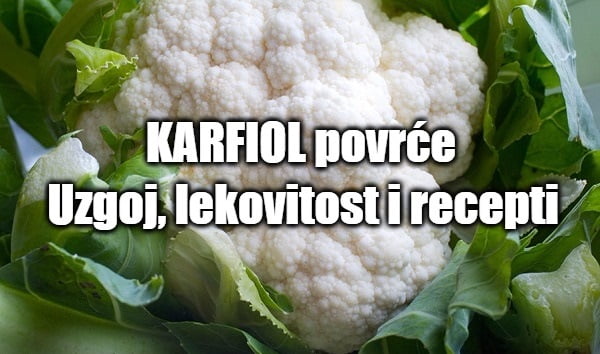 It is necessary for sowing nutritious, fertile soil, rich in humus. It is sown at a depth of about 20-25 cm, at a distance of about 40-50 cm. The earth must be provided with enough water and ventilation, because cauliflower likes water, so it is also suitable for the earth to be as loosely as possible River Island PH to be between 6 and 6.5.

Temperatures which need to be provided and which cauliflower likes varies from 10 – 20 ˚C, depending on whether it is day or night temperatures. If the temperatures are higher and go over 25 ˚C, the yield will be lower, the heads will be small and unsightly, which will certainly reduce both the weight and the yield. Flowers are protected from the sun by tying leaves above them.

Growing cauliflower takes place in darker places where the temperature is 0-2˚C. Before the onset of severe frosts, the plants are taken out of the ground and planted next to each other in a sheltered place, where they grow up for the next 2-3 months.

For planting cauliflower are ideal greenhouses and other protected spaces, where seedlings are placed at intervals of 40×60 cm and 50×50 cm. That is about 30-40 plants per square meter, which after 30-45 days will give about 5-8 kg of cauliflower (period from October to December) per square meter, ie even 20-50 tons per hectare.

Cauliflower harvest it is done depending on the variety, in spring or autumn, and it is best on a nice and sunny day. Then the fruit, i.e. the inflorescence with bracts, is cut off and separated from the otherwise poorly developed root, which is a characteristic of cauliflower, and later these same bracts can be shortened, although it is desirable that they continue to protect the fruit from color change, i.e. from the possible appearance of yellowing on the bracts cauliflower.

Cauliflower is a vegetable that contains the entire opus vitamins from the vitamin B group (from B1, B2 and B3 vitamins, through B5 and B6, up to vitamin B9). Also from vitamins, of course there is indispensable vitamin C.

Furthermore, cauliflower also abounds minerals such as primarily potassium and phosphorus, but also useful ones phytochemicals, glucosinolates and isothiocyanates which play an important role in detoxifying the body and preventing cell mutations and cancer cells.

Cauliflower is also very a good source of protein and fiberwhile on the other hand does not contain fat and sodium.

Due to such an abundant content of nutrients, cauliflower is an ideal food in the kitchen, especially if you are a fan of a healthy diet. It is one of the first foods that are introduced to children’s diet, in a stewed or boiled state, pureed and in the form of porridge.

Because of its ingredients, such as numerous phytochemicals, as well as vitamin C, cauliflower is very powerful antioxidantand thus cleans the body from the effects of free radicals and other toxic substances harmful to the body and in that way prevents the occurrence of numerous tumor processes in the organism.

Due to the presence of potassium, which is abundant, it is ideal for the development of the skeletal and muscular system in humans, as well as for their strengthening and protection against diseases.

It has an anti-inflammatory effectas protection against diseases as they are arthritis, obesity and diabetes. Its positive and beneficial effect on the prevention of numerous diseases has been proven cardiovascular system. It has a positive effect on circulation and reduces the risk of heart attack and stroke. Too, lowers the level of bad LDL cholesterol in the blood.

The list of medicinal properties is really too long and goes into prevention and help in therapy for many more diseases and conditions such as depression, eczema, impotence, multiple sclerosisthen dental diseases, prostate problems, hemorrhoids and many other diseases.

When it comes to using cauliflower in the kitchen, there are numerous ways to make the most of all the benefits this vegetable has to offer. Fresh salad can be prepared from it, ie you can use it raw. You can also fry it or use it to make a number of delicious cream soups or stews, with or without meat. Many people also like it in its sour version, in which it is found in pickles, but also as a side dish to meat, fish and numerous other dishes.

In addition to inflorescences, cauliflower leaves can also be used in food. They are ideal for any kind of digestive problems (intestinal-gastric), but also because they have a lot of nutrients and a lot of energy and are difficult to digest, they are also ideal for a dietetic way of eating because they keep the body in a state of satiety for a long period of time.

For our first recipe with cauliflower, which is considered to be quick and easy to prepare and suitable for 4 people, we need:

To begin with, you need to clean the cauliflower, separate it into smaller florets, wash it and then cook it in salted water to which we have added a spoonful of vinegar. After that, fry the chopped cauliflower in a little oil with garlic, salt and pepper and pour it into an ovenproof dish. We then cover it with a filling of 1 egg, a spoonful of flour, a cup of milk and dry spices to taste and put it in the oven to bake until the crust is set and the cauliflower turns golden.

For the famous cauliflower cream soup you need:

Meanwhile, melt the butter and fry the onion in a deep pan. Add the flour and pour the chicken soup and milk into the pan, stirring constantly. Cook until it boils, then reduce the temperature and cook for as long as it takes for the mixture to thicken. Then add the cauliflower, cook for a few minutes, and then put everything in a blender. You will get a delicious cream soup that you serve warm of course.

You can make delicious and healthy muffins from cauliflower, and you need the following ingredients:

Recipe 4 – Cauliflower as a side dish

We have already mentioned that cauliflower can be served as a side dish to numerous dishes, especially meat and fish dishes. You can freely take the ingredients you are preparing, so as much cauliflower as you want or need, then polenta, olive oil and spices to taste.

It is prepared simply, by first sautéing the cleaned cauliflower florets for a few minutes, and then mixing them in a little oil and polenta so that they are completely covered. Then add spices to taste and mix everything. Place in an ovenproof dish, cover and bake until the cauliflower turns golden-yellow. Serve as a side dish to other dishes.