You are here: Home / Health / Is There a Difference Between Acupuncture and Dry Needling?

It is a technique for the treatment of certain painful conditions and produces regional anesthesia. In this technique, a thin needle is passed through the skin to specific points. The other end of the needles which remain free are twirled or in certain cases, a small amount of electric current is passed through them. By the use of Acupuncture method, anesthesia is produced for abdominal, thoracic, and neck and head surgeries. It is basically a method for medical investigations and has been used in the Far East from many past years. But very little attention was given to acupuncture in western culture until recently.

In online Miriam-Webster dictionary, acupuncture is stated as: “An originally ancient Chinese practice of inserting fine needles through the skin at specific  points especially to cure or relieve pain (as in surgery).”

Now to get a better understanding of the term, dissect the word acupuncture; In Latin, acu means ‘needles’ and puncture is to ‘pierce’. This term was established in 1700 and is used today.

In acupuncture, filiform needles are being used which are free from tube carrying liquid. These needles are disposed of after use, they are sterile, and blister packed. The points where they are inserted are very rare and specific and has been discussed for thousands of years. The points are organized into meridian lines which further corresponds or meets the different functional organs of the body. In some cases, there are 1000 points to be found but generally, 365 are studied along with 12 meridians.

For the purpose of Spasm treatment, dry needling and acupuncture are very identical or similar. 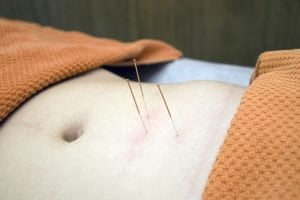 According to National Institute of health, dry needling is; ‘Dry needling is a skilled intervention that uses a thin filiform needle to penetrate the skin and stimulate underlying myofascial trigger points, muscular, and connective tissues for the management of neuromusculoskeletal  pain and movement impairments.’

It has been discovered in the 1970’s that trigger or spasm can occur without even injecting the medication. And this result is later called ‘twitch response’. And it could be created without even putting any liquid medication in the needle thus called ‘dry needling’.

Though after some experiments it was found that wet needle and dry needle are actually acceptable and comparable by the patient and the provider. There were no problems or side effects found with medications whatsoever. Though some of the side effects of the medications used in injections are given; increased pain, headache, fever, high blood sugar, sleepiness, bleeding at the site of injection, decrease in immunity due to use of steroids, stomach ulcers, anxiety, avascular necrosis, cataracts, infections, etc.

The side effects of dry needling are similar to acupuncture as they are nearly identical which includes, ache, bleeding, or pain after the treatment. Though the infection can happen in wet needling it is very rare. There will be less worry about infection as long as the practitioner uses disposal and the right technique. There are no other harmful symptoms regarding dry needling or acupuncture as no medication is injected and there is no risk of any infection, bacteria or any other biochemical thing to affect the body.

The Attempt to Separate

There is a turf war going on over this technique and its basic definition. Medical doctors, physical therapists, physiotherapists, acupuncturists and chiropractors are all competing for the refund from insurance companies. The refund or reimbursement is related to the specific condition or definition of the treatment.

So each provider has the claim of the stake and doesn’t want others to have the same base for the patient and the ability to bill for a certain procedure. That is why there are definition wars all over. Each of the providers has different definitions of acupuncture and dry needling. And according to them, it ensures the professionalism, accuracy, technique, and value for the business. It is important to choose a specialist who: has accomplished training best suited to the kind of acupuncture they practice like My Home Therapy

Though in reality there are some differences in the practice. When you search you see the twisting or rotation of the needle which in other words is positioning and is a way to explain the pushing and pulling of the needle. The definition, that of dry needling itself, are all gathered from the research articles of the journalists. Once you start looking and researching the procedure and techniques of them both, you will get to know that they are way too much similar.

The difference in Practice

Acupuncture is largely used for the subtle energy and transferring the flow of that energy from the practitioner to the patient. Some patients may complain about the slippery pulse or spleen meridian. Although the acupuncturist is way too much professional this is rather a very hard and typical finding.

While getting the treatment you may have a spasm or ‘ashi’ point which normally happens during the treatment but can be treated with shallow needlework. In acupuncture, the needle goes to the depth of 1”. Most of the spasm that happens is on the back so in those areas, the needle remains shallow (less than 1”). There is no difference in the needles though unless you are using a ‘real’ dry needle for the purpose of dry needling when a regular filiform needle can do the job. The acupuncture and dry needling both come in various lengths. Depending on the depth and the technique some practitioner use long and some use small needles. Though the average and recommended needle length are 5mm.

The first question of many of the patients is if the needle is sterile or not. Nowadays these needles are manufactured in plants along with other highly efficient medical equipment. They are sterile when they are made and comes in blister packs. Each one of the needles is made up of stainless steel and some are covered with silicon which makes the insertion easier. Briefly, the needles are sterile and they get disposed of once they are used. This way the risk of infection is greatly reduced.