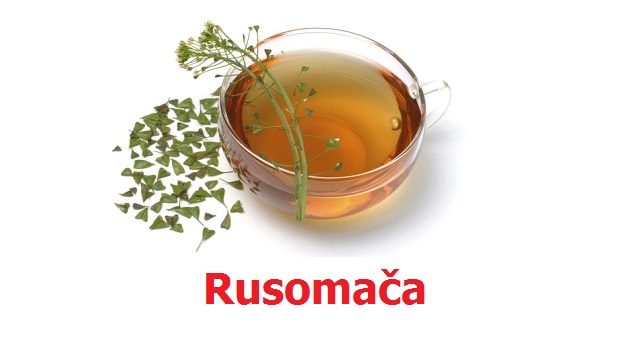 Fenugreek is a plant that grows all around us and is considered a weed, but it has been known for its many medicinal properties since ancient times.

Its leaves are small and heart-shaped, and it blooms from early spring to late autumn in clusters of tiny white flowers.

It has small fruits in the form of scales. All parts of the plant are medicinal, and it is primarily used for the preparation of teas and tinctures, although the plant can also be used fresh.

Rusomacha contains very important ingredients that have a positive effect on the health and vitality of the organism. First of all, it is rich in vitamins (vitamin C, thiamin, riboflavin), minerals (especially high concentration of potassium), proteins, and also contains significant amounts of essential oils, saponins and flavonoids.

The plant has no toxic effects, so it can be used by even the most sensitive people and chronic patients. However, it is not recommended for pregnant women because it can cause uterine contractions and premature labor, but it is also not recommended for nursing mothers and children. Also, it is not given to people taking antihypertensive drugs, drugs for thyroid diseases and sedatives.

Due to the large number of useful and medicinal ingredients, it is most often used in alternative medicine for the following conditions and diseases:

– stimulates circulation and purifies the blood

– stops bleeding from gums and sinuses

– stops internal bleeding (from the mucous membranes of the digestive tract, in case of blood in the urine)

– with heavy menstrual bleeding and other “female diseases” (painful and irregular periods, inflammation of the ovaries, mastitis)

– in atherosclerosis and high blood pressure

– in case of acute inflammation of the urinary bladder

– as a diuretic with mild antiseptic action

Fresh herbs are used to prepare the medicinal tincture. Leaves, flowers, fruits and stems are finely chopped and placed in a glass container, preferably a jar that is filled almost to the top.

Then 70% pure alcohol or some strong brandy is poured to the top of the jar, so that the alcohol completely covers the chopped plant. The jar is then tightly closed and left to stand in the sun or a warm place for two full weeks. After that, it is strained and poured into a glass bottle and stored tightly closed in a dark place.

The tincture has a beneficial effect on the cardiovascular system, improving circulation and is good at preventing atherosclerosis. Rusomacha has the ability to constrict blood vessels, so the tincture is very useful for stopping bleeding, both external (from the nose, gums, wounds) and internal (from the intestines, kidneys, urinary tract, uterus and vagina). It is particularly effective in stopping excessive menstrual bleeding.

In case of serious urinary infections, it is used due to its significant uroantiseptic properties. It is also used for disinfection of superficial skin wounds, scratches and cuts. It is also useful for massage and muscle strengthening after long-term immobilization.

If there are any of the mentioned complaints, take 30 drops of the tincture twice a day before meals.

This plant is most often used to prepare tea due to its pronounced medicinal properties, but it can also be used in the form of herbal mixtures when the effects of some other plants need to be enhanced, especially when bleeding needs to be stopped. You can buy wolverine tea in a herbal pharmacy, or you can pick it yourself and dry it, and then use it depending on the ailments you have.

The use of wolverine tea

To prepare tea, we need 2 teaspoons of dry herbs, which are poured with 250 milliliters of boiled water. Let it stand for 10-15 minutes, then strain and drink, or use as a poultice or add to warm water and use as a bath.

To stop nosebleeds – if the bleeding from the nose is profuse and long-lasting, soak a cotton ball or gauze pad with wolverine tea and place it in the nose.

To stop bleeding gums – the tea is used chilled to rinse the gums, three times a day for three minutes.

In mastitis – tea poultices are used, or dry rosomacha is scalded and placed in a cotton cloth, and then applied to the painful and inflamed area. It reduces the inflammatory process, facilitates the expression of milk because it widens the milk ducts.

In addition to use in the form of tea and tincture, this plant can also be used in the form of fresh juice, in the form of specially obtained salves and powders. Also, since ancient times, various healing drinks have been used with wolverine, such as wine, which is easy to make and also very healing.