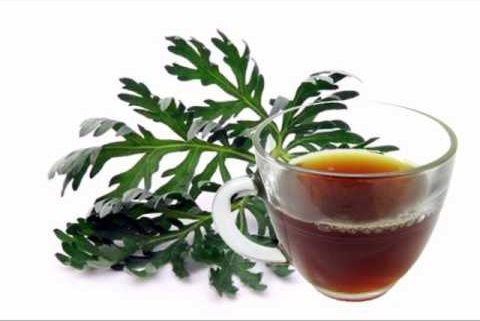 Wormwood (Artemisia absynthium) is a perennial plant that grows throughout Europe, Asia and Africa. Since ancient times, this plant has been used as a hallucinogenic substance in many rituals around the world. In ancient Greece, wormwood was used as a medicine for various diseases, primarily for diseases of the digestive and nervous systems. In Africa, there was a belief that wormwood tea contained the secret of absolute freedom of the mind and that by using this tea, people could reach the peak of their creativity. In larger quantities, this drink has an intoxicating effect, and it is known that Van Gogh, Hemingway and other great artists consumed wormwood. Wormwood is the main ingredient of absinthe liqueur, and it is also used as an additive for wine, vinegar or vermouth. Powder, extract or tincture can be prepared from wormwood.

However, the most popular is wormwood tea, which is known for its bitter taste, so it is mostly consumed with the addition of honey, ginger and lemon. If drunk in moderate doses, this tea is harmless and represents the strongest natural remedy for many diseases. You can see a little more about the healing properties of wormwood tea and some of the most common recipes for preparing this tea below.

Wormwood tea is good for regulating digestive problems, as it prevents the development of bacterial infections and reduces the level of acidity in the stomach. It has a beneficial effect on the intestines and is the best medicine against parasites. Thanks to thujones and isothujones, wormwood has the ability to kill not only parasites but also their eggs. Since bitter foods are known to regulate indigestion, wormwood tea is one of the most effective remedies for indigestion. Namely, the bitter taste of wormwood affects the production of bile and the work of the intestinal glands, thus improving digestion.

Then, wormwood tea can be very effective in treating a liver that has been damaged by drugs, toxins, or radiation. It is especially effective if the organism has been poisoned by mushrooms or some poisonous plants. When drunk in small quantities, this tea has a beneficial effect on the work of the kidneys and alleviates kidney problems. Wormwood is also a well-known folk remedy against rheumatism, gout, anemia, high fever, malaria, insomnia and depression. Wormwood tea removes chronic fatigue, invigorates the body and restores energy and vitality. This tea is especially good for alleviating menstrual problems and for regulating the menstrual cycle in women. In combination with alfalfa and sage, wormwood tea is an excellent remedy for relieving menopausal symptoms. It can also help if there is a hormonal imbalance in the body, as well as in case of obesity.

Recipes for preparing this tea:

There are various recipes for making wormwood tea, depending on what health problem you want to solve. What is important is that wormwood should not be boiled, but should only be poured with boiling water and then strained.

Recipe 1. (Wormwood tea against irregular cycle) To make this tea, mix 100 g of wormwood with 100 g each of sage and parsley. Pour 3 cups of boiling water over this mixture, stir the tea and cover it. Let the tea steep for about half an hour, then strain. You need to drink this tea 7 days before the start of menstruation. Once the cycle starts, stop drinking this tea.

Recipe 2. (Wormwood tea to improve appetite) Put ½ teaspoon of dry wormwood leaves in 2 dl of boiling water and let it steep for about 10 seconds, then strain. It is necessary to drink this tea several times a day, and if the taste is too bitter, you can add a few mint leaves to it.

Recipe 3. (Wormwood tea for stomach problems) First, crush one teaspoon of wormwood and ½ teaspoon of lincura root, cornflower and grated orange peel and 10 mm cinnamon stick in a bowl. Pour one cup of boiling water over this tea mixture and let it steep for about 10 minutes, then strain. Drink small amounts of this tea after each meal.

Side effects and possible contraindications:

Although wormwood can be extremely beneficial for health if used in small quantities, it should not be used during pregnancy and breastfeeding or if there is bleeding in the stomach or other internal organs.

Also, it is important to drink it in the prescribed doses and at the exact time, because the thujone found in this tea has a toxic effect on the nervous system, can lead to spasms and cause psychological problems.